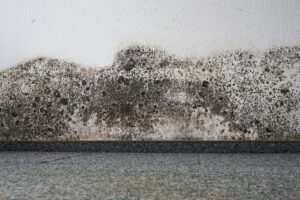 Though these two potentially harmful household fungi are often talked about in the same breath, they each have unique traits that can help you tell them apart. Distinguishing the difference between the two can dictate how to get rid of them.

Mold is a very common fungal growth that forms and spreads on various kinds of damp or decaying matter and can be found both indoors and outdoors. It is estimated that over 300,000 strains of mold species exist, and all species require water to grow.

Mold is nature’s way of breaking down dead and decaying organic matter. This is great because without it, decaying things like fallen trees, plants, leaves, etc, would just sit on our properties. However, mold doesn’t know the difference between a fallen tree and a wet wall stud. With just the right temperature and moisture, mold can grow on anything from wood, paper, carpet, food, insulation, and more. It can also grow on nonporous materials like concrete and brick. It will eat any surface and weaken it as it grows.

When it is left alone to grow, it will infest a home and compromise anything in its path. If the mold is not immediately taken care of, rampant mold growth could take over a house and, in extreme cases, cause the structure to be condemned.

Mildew is also a part of the fungi family, but is in a different genus. It is regarded as a parasite because it only feeds on living plants. There are two groups, commonly known as Powdery Mildew and Downy Mildew. Both of these groups take on the form of a white or gray powdery deposit on plant leaves and stems. Mildew is caused by the combination of poor air circulation and high humidity. Often, the term mildew is used to describe mold growth that isn’t destructive since it doesn’t have roots. However, most homeowners will not experience mildew growth unless there are tons of plants in the home. Luckily, the majority don’t, so mildew will rarely ever be an issue. An expert should never lump together mold and mildew together, or say they’ve found mildew growing in or on a building.

Mildew isn’t typically as dangerous or damaging as certain kinds of mold (like black mold), but it should be taken just as seriously. Prolonged exposure to mildew can cause adverse health effects. Mildew can produce mycotoxins as well, which cause cold or flu-like symptoms. It can be more dangerous though if you have existing conditions such as allergies or asthma.

Both mold and mildew are products of prolonged water damage. They begin to grow within 24-48 hours and cause serious damage. It’s imperative that water damage is taken care of as soon as possible to minimize the number of problems that you can experience. Contact professions at Restoration 1 of Des Moines to assist you with any water damage restoration to ensure that mold and mildew will not grow in your home.

Restoration 1 of Des Moines provides 24/7 service for water damage, fire damage, and storm damage for residential and commercial properties. Our team is certified by the IICRC and follows all industry standards to ensure our customers receive the best care.

Serving Ames, the Des Moines Metro Area, and surrounding areas, we are locally operated and ready to respond as soon as possible to your property damage emergency.